Well, hello. Where have I been!? Can't seem to get to finishing any needlework or blogging lately.
I did finish my CQJP 2012 block for July and here it is. 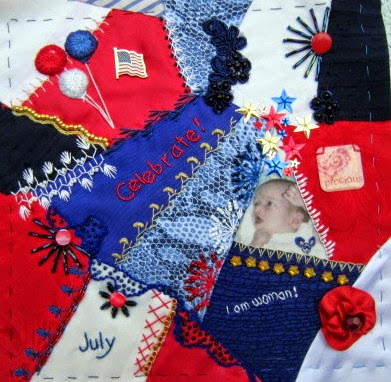 The baby is my granddaughter born in July and now eleven years old. And the colors celebrate our country's birthday as well.

I'm half way through a year of blocks. I'm working now on June: rain forest. Motivate me to speed things up, someone.
Posted by Unknown at 5:18 PM 1 comment:

It's the simplest Husqvarna Viking sewing machine and it's come to live at my house. What happened to my fifty year old Singer is a sad example of my incorrigible flakiness. I took out the bobbin and it's holder to rewind it. I walked across the room to get a spool of thread. When I returned, the bobbin holder was not to be found. It's got to be in this room or else aliens from another dimension have it. It's been 6 months at least and I haven't found it, so I've put the Singer aside with regret and brought a Viking into the house. I'm hoping it can ward off the aliens.

This post is to show you what I have created trying out the machine: place mats.  True to my crazy quilting love, they are crazy pieced using the layer cake "stack and whack" method. I made eight mats, eight layers of fabric to stack and whack. After all the whacked pieces were sewn together and layered with a piece of interfacing, and  a backing fabric placed right sides together on the top, I sewed around the edges, leaving an open space to turn the mat right side out. After ironing each mat neatly, I used the machine feather stitch to decorate each seam and, at the same time quilt the mat. I finished the whole with a machine scalloped satin stitch around the edge. The machine works very nicely and I'm pleased with my set of eight new place mats. 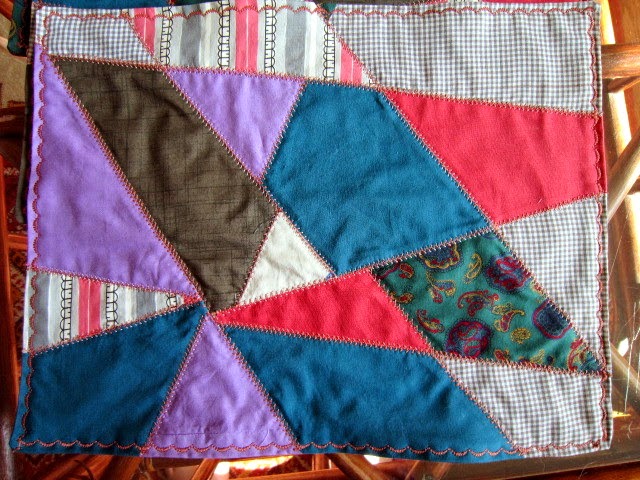 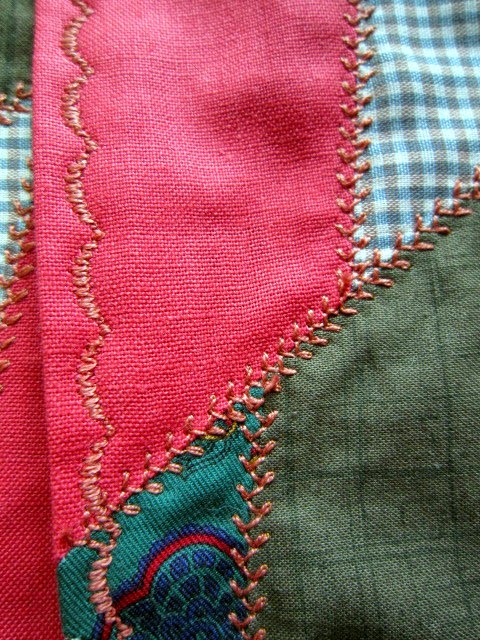 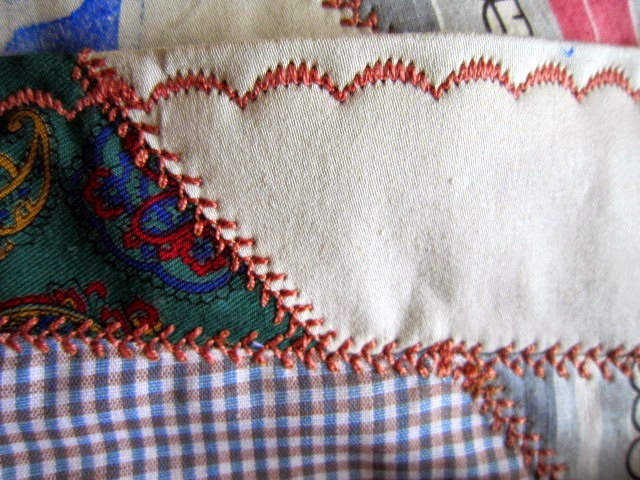 Posted by Unknown at 7:38 PM No comments:

Surprised by needlework on a family reunion tour

This weekend I was in High Point, North Carolina for a reunion of the Mendenhall Family Association. When I was actively doing family research, I followed the line of my great-grandmother, Sarah Ann Mendenhall Mount, and found other Mendenhall researchers. I was a charter member of the Association when it formed and have attended all seven reunions held.

The Mendenhall's were among the first to buy property from William Penn in his new American land grant named Pennsylvania. Four siblings, John, Benjamin, Margary (Martin) and Mary (Newlin) moved there in 1684. I'm descended from John and his grandson James, who in 1862 moved to Guilford County, North Carolina, where many Pennsylvania Quakers migrated and settled. They were millers, farmers and very active in education. The little town of Jamestown near High Point was named for James. His grandson Richard built a plantation house there which is on the register of historic places and was on our reunion tour, along with three local Quaker meeting houses and Guilford College.

Okay, I'm getting to the needlework. There is a tiny little museum at the plantation containing some artifacts of the time period (late 1700s-early 1800s). First thing that caught my eye was this stunning dress. 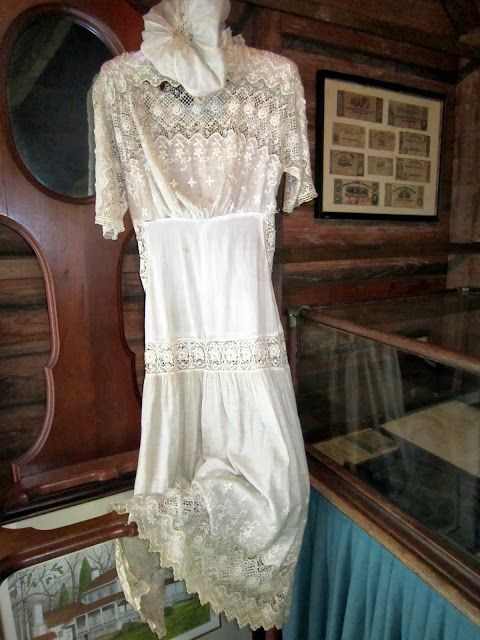 I don't know if this was worn by Quakers; they did sometimes dress less plainly than commonly thought, but this is very "not plain." Here are some close ups of the lace and embroidery trim. 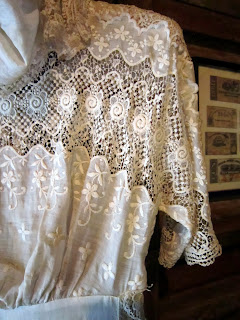 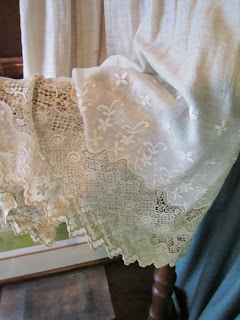 The pretty coverlet is in a case. 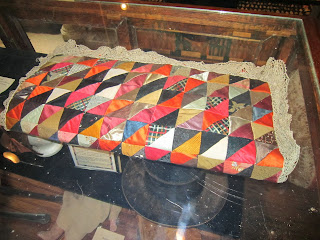 In another building on the site, there was a poster display about Quaker dress, which had these two interesting photos. 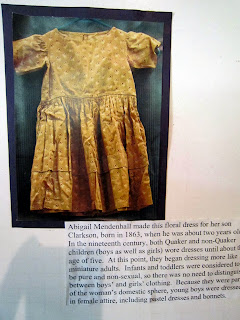 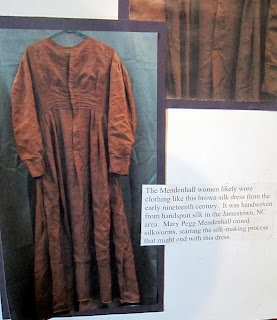 We then moved on to the Springfield Meeting House which maintains a larger museum of period artifacts. Here is a Quaker wedding dress. 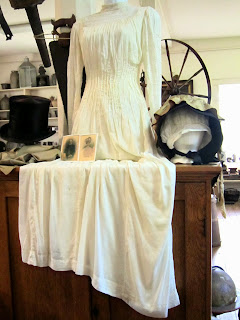 Plain, but lovely. And there are these two other examples of nice needlework in the museum. 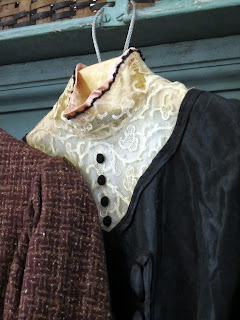 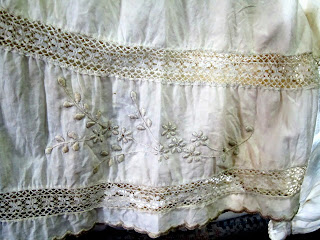 I've been working slowly lately, but have finished the circle part of my quilt from the Betty Pillsbury workshops. 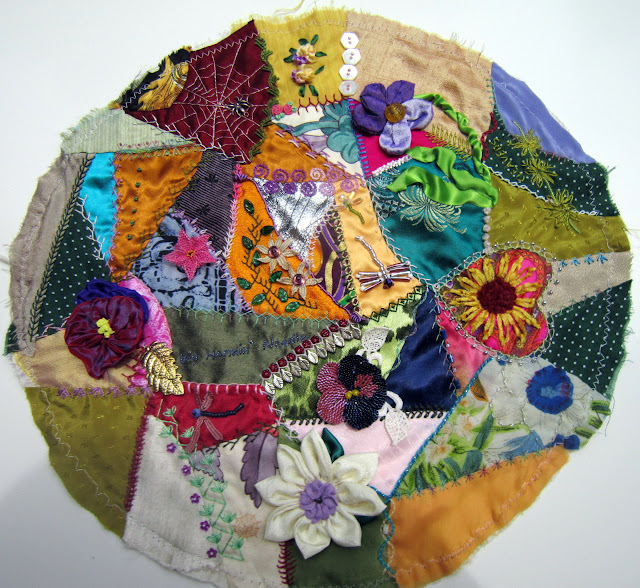 I continued the pansy theme with a beaded pansy from a pattern in The Beaded Garden by Diane Fitzgerald, Interweave Press LLC, 2005. I also titled the block "Big Honkin' Needle" because that is Betty's term for the size chenille needle needed to work with chenille. It's a size 14. I used it for the chenille flower inside the heart on the left.

Betty is, besides a crazy quilter, a herbalist. During informal discussion at the workshop, cleavers was mentioned. It's an interesting plant that makes tea said to aid weight loss. I pulled out my Petersen's Guide to Edible Wild Plants and used the line drawing of cleavers there to add a picture of it to the block.

I added a third dragonfly; this one with woven picot wings and a couple of 7 mm silk ribbon pansies.

I plan to set this circle into an asymmetrical border, inspired by a couple of Betty's quilts she had on display during the workshops. I'm putting it aside for now, though. I'm feeling the pull of my Pink Flower Garden quilt UFO. It's a big one and I plan to work on it until I get bored, then take up my CQJP blocks again. Follow your bliss.
Posted by Unknown at 2:35 PM No comments: 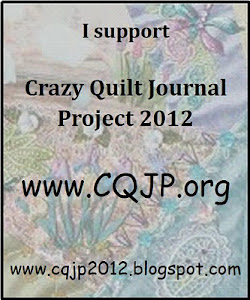